With the NASCAR Sprint Cup season almost at the one-third point – we’ve completed 11 of the season’s 36 races – movement on the Chase Grid starts to slow down somewhat.

In addition, we’re almost halfway to the start of the Chase for the Sprint Cup – 11 of the 26-race regular season.

For this week’s Chase Grid, there was no movement among the six drivers who have won races thus far in 2016. Kyle Busch remains atop the Grid with a series-high three wins.

Drivers who are outside of Chase contention by points include Ryan Newman (who climbed two spots to 17th position), Kasey Kahne dropped from 17th to 18th, Ricky Stenhouse Jr. climbed from 20th to 19th, and Trevor Bayne suffered the biggest from Talladega to Kansas, losing four spots from 16th to 20th.

Here’s how this week’s Chase Grid looks after Kansas: 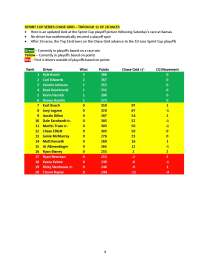