The NASCAR Sprint Cup Series competes in the GoBowling.com 400 today at Kansas Speedway.

START: George Brett, Major League Baseball Hall of Famer and former Kansas City Royal, will give the command for drivers to start their engines at 7:37 p.m. The green flag is scheduled for 7:47 p.m.

PRERACE SCHEDULE: The Sprint Cup garage opens at 12:30 p.m. The driver/crew chief meeting is at 5:30 p.m. Driver introductions are at 7 p.m.

FORECAST: The wunderground.com site predicts 83 degrees and a 0 percent chance of rain at the start of the race.

LAST YEAR: This was where the feud between Joey Logano and Matt Kenseth escalated. Logano’s tap spun Kenseth out of the lead last fall, allowing Logano to win the race but it lead to heightened tensions between the drivers. Jimmie Johnson won this event last spring by staying out when many of the top cars pitted late. 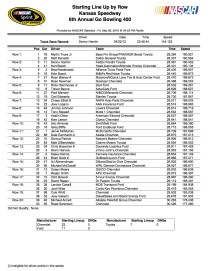