Martin Truex Jr. has accomplished a lot in his three seasons and 82 races with Furniture Row Racing. One thing he didn’t have before Friday at Kansas Speedway was a pole.

Truex and his No. 78 Toyota claimed the pole for Saturday’s GoBowling.com 400 with a speed of 190.921 mph. It’s the third pole earned by Furniture Row Racing and Truex’s first since 2012 at Texas Motor Speedway with Michael Waltrip Racing.

“We’ve been close the past couple of years,” Truex told Fox Sports 1. “We’ve made some mistakes throughout qualifying. It kind of took us awhile to figure out this three-round (format) deal.”

Truex’s best start this season was third at Texas Motor Speedway. His previous best at Kansas was fourth in last year’s spring race. The 1.5-mile track in Kansas City, Kansas, has proven elusive to Truex. In 15 starts, Truex has four top-five finishes, including runner-up results in both 2012 races. He’s led the most laps at Kansas twice but failed to win.

“That’s part of racing,” Truex told FS1. “Sometimes you’re the bug, sometimes you’re the windshield, I guess. Unfortunately, I’ve been the bug more times than most. Love this race track. We’ve been able to really perform well here, even in years when it seemed like our cars weren’t as good as some of the guys we were racing against.”

Following Truex will be Matt Kenseth, Denny Hamlin, Kurt Busch and Brad Keselowski. One driver who knows the importance of Kansas to Furniture Row Racing is Busch, who drove the No. 78 in 2013.

“When we were out here a few years back, there’s something special about (being based) in Colorado and calling this your home track,” Busch told FS1. “It just means you’re going to go faster.”

Busch earned FRR’s last pole, at Darlington Raceway in 2013. The first pole for the Denver-based team was by Joe Nemechek at Talladega Superspeedway in 2008.

Only three Chevrolet entries advanced to the final round of qualifying. After Busch, the next Chevy drivers on the starting grid are Ryan Newman (eighth) and Paul Menard (11th), both from Richard Childress Racing.

The winner of the last Kansas race, Joey Logano, will start 14th. That’s the same spot he started when he won last October.

Friday was the first qualifying session since Darlington last year where no Hendrick Motorsports drivers advanced to the final round. 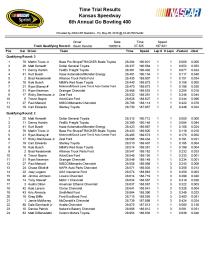 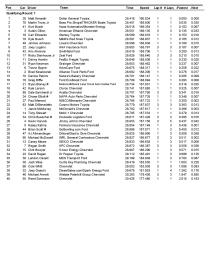