For the first time in 96 starts, John Wes Townley will lead a Camping World Truck Series field to the initial green flag Friday night after earning the pole for the Toyota Tundra 250 at Kansas Speedway.

“It gives us a big of confidence, we were really faster yesterday (in practice),” Townley told Fox Sports 1. He was the fastest in the final of three practice sessions.

“I think (1.5-mile tracks) have grown to me,” Townley said “I’ve gotten better at these things over the years and just a lot of experience and working at it has really paid off. I’m really excited about what Athenian Motorsports is a product of and what we’re bringing to the race track.”

Townley’s best finish at Kansas in 11th. He hasn’t led a lap in four starts.

Filling out the top five is Tyler Reddick in his second top-10 start of the year, Cole Custer and Christopher Bell. Points leader John Hunter Nemechek will start sixth. NASCAR on NBC analyst Parker Kligerman, who is second in the points, will start 18th.

Johnny Sauter was unable to make a qualifying run in the final round because of loose hoses found by NASCAR on his truck. After fixing the hoses, Sauter will start from the rear. Ryan Truex qualified 21st, but will go to the rear of the field due to an engine change.

Here is the starting order for the Toyota Tundra 250. 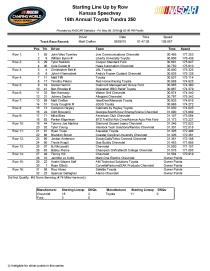