William Byron waited until near the end of Thursday’s second of three NASCAR Camping World Truck Series practice sessions to shoot to the top of the speed charts.

When the 55-minute session was over on the 1.5-mile Kansas Speedway, Byron had taken his Kyle Busch Motorsports Toyota Tundra to a field-best speed of 176.650 mph. 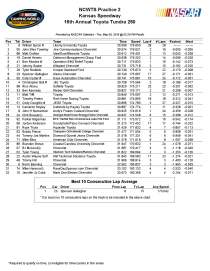