Even though the NASCAR Camping World Truck Series has been off for just over a month, you wouldn’t be able to tell it by Tyler Reddick’s performance in the first of three practice sessions Thursday at Kansas Speedway.

Although 28 trucks were listed on the timing sheet, only 27 took at least one lap of practice 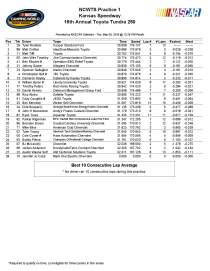