With a wild race at Talladega Superspeedway to dissect, analysts Steve Letarte and Parker Kligerman join the latest NASCAR on NBC podcast to offer their unique insights.

Letarte makes a case that aero development might be contributing to three cars getting airborne Sunday at the 2.66-mile track.

“The concern really is the airborne cars,” Letarte said. “Nothing is a guarantee, but NASCAR has done a great job of increasing the opportunity for a driver to walk away from some serious crashes. But when cars get airborne, it’s very hard to control their energy and hard to understand where they go.”

The former crew chief for Dale Earnhardt Jr. believes there might be a connection between the liftoff incidents and teams heavily focusing on the undersides of their cars to find speed by regaining downforce. Photos of the cars after they got airborne showed they had different setups, which “tells me teams are doing things to help the performance and perhaps inadvertently, the downstream effects change the rollover speed.

“They are getting off the ground, in my opinion, easier than they have in the past,” he said. “This is an awful thing to say, but it’s true: The only one who cares about the liftoff speed of those cars is NASCAR. I was a crew chief for 10 years and never did I change tailpipes and say, ‘Man, that’s 3 counts of drag better. I wonder if that’ll make that thing fly if I did that?’ That’s not my job. My job is to make the fastest car possible.”

Letarte also explains why the rash of steering wheel problems will be a teachable moment for younger racers and what makes Talladega winner Brad Keselowski so good in the draft.

Kligerman will return to the Camping World Truck Series this weekend at Kansas Speedway and details the recent developments of his underdog team, which remains second in points despite having only two full-time employees.

The former Talladega winner also describes how drivers wrestle with the levels of acceptable risk at Talladega and why all of the focus on understanding side-drafting and aerodynamics has made drivers and teams so good, it raises the chances of wreckfests such as Sunday.

Other topics covered by Kligerman:

–How the lower downforce rules package might affect racing this weekend at Kansas Speedway.

–The NASCAR America analyst’s tricks for wheeling a driving simulator while talking live on national TV (hint: It helps to have a few thousand hours behind the wheel and several producers as spotters).

Here are time codes for the episode for easy referencing: 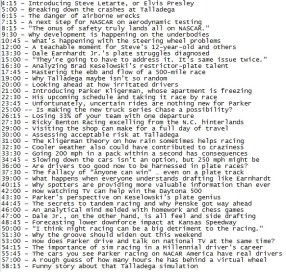