The NASCAR Sprint Cup Series competes in the GEICO 500 today at Talladega Superspeedway.

START: MSgt. Larry Nix, Air University/23rd Training Squadron at Maxwell Air Force Base will give the command for drivers to start their engines at 12:50 p.m. The green flag is scheduled for 1:02 p.m.

PRERACE SCHEDULE: The Sprint Cup garage opens at 8:30 a.m. The driver/crew chief meeting is at 11 a.m. Driver introductions are at 12:05 p.m.

FORECAST: The wunderground.com site predicts 79 degrees and a 0 percent chance of rain at the start of the race. The chance of rain increases during the day to 73 percent by 4 p.m. 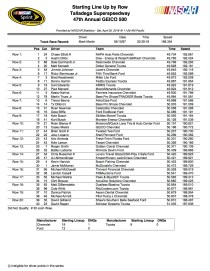