The NASCAR Xfinity Series competes today at Talladega Superspeedway in the Sparks Energy 300. It marks the Xfinity Series’ only visit to NASCAR’s longest track this season.

Here’s what you need to know about the series’ ninth race of the season:

START: Wayne Sternbergh of Sparks Energy will give the command to start engines at 3:07 p.m. The green flag is scheduled to wave at 3:19 p.m.

PRERACE SCHEDULE: The Xfinity Garage opens at 9 a.m. The driver/crew chief meeting is at 12:15 a.m. Driver introductions are at 2:30 p.m.

NATIONAL ANTHEM: Jordan Sasser, a top 24 finalist from “American Idol,” will perform the anthem at 3:01 p.m.

TV/RADIO: Fox will broadcast the race with its prerace coverage beginning at 2:30 p.m. Motor Racing Network’s broadcast on radio and at MRN.com, begins at 2:30 p.m. SiriusXM NASCAR Radio will carry the MRN broadcast.

FORECAST: wunderground.com predicts a temperature of 86 degrees and a 32 percent chance of rain at race time.

LAST TIME: Joey Logano led 40 of the 113 laps in scoring his second career Xfinity win at Talladega. He took the lead for good with four laps left. Brian Scott finished second. He was followed by Austin Dillon, J.J. Yeley and Joey Gase. 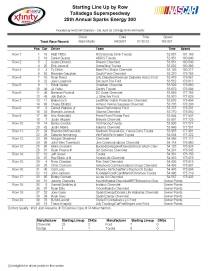