Trevor Bayne’s undulating career path and Danica Patrick’s connection with kids are among the highlights of the latest NASCAR on NBC podcast.

Bayne joined the podcast before his Tuesday appearance on NASCAR America, discussing his wild ride after winning the 2011 Daytona 500. After winning NASCAR’s biggest race in one of the major upsets in history, Bayne suffered through health problems (eventually leading to a diagnosis of MS) and a lack of funding kept him from racing full time in 2012.

“I’ve got a very strange career so far,” he said. “Even just my first year, going from a victory to the hospital, I said, ‘We just went through 10 seasons worth of a drama in one year.’ ”

Bayne persevered and moved full time into NASCAR’s premier series last season with Advocare, a sponsorship that materialized after his chance meeting with the company’s president.

“It’s crazy how it worked out,” the No. 6 Ford driver. “Five months before, I didn’t know what Advocare was.

“I tell young drivers all the time how important relationships are, You never know who you’re talking to, and some of my biggest breaks in racing have come from talking to people who most of the time I didn’t know who they were and what they did.”

Bayne also discussed his renewed commitment to triathlon training, his throwback paint scheme tribute to Mark Martin for the Southern 500 and his improvement in the 2016 season. Some of his results can be credited to a working relationship with crew chief Matt Puccia, who has bonded with Bayne as the father of a newborn.

The second guest on the podcast is Danica Patrick, who joined by phone from Chicago where she was promoting a Teenage Mutant Ninja Turtles sponsorship. The Nickelodeon promotion, which is in conjunction with the Chase for the Sprint Cup opener at Chicagoland Speedway, is the latest chance for Patrick to connect with younger fans, who seem to be drawn to racing’s most successful female driver.

“But I’m probably someone their parents have pointed out to tell them a good story that you can do whatever you want. Just because you’re a girl doesn’t mean you can’t do something that boys do.”

Patrick also discusses how it felt to have Tony Stewart back at the track, her 2016 season with new crew chief Billy Scott and the new NASCAR news on lug nuts (“I plead the fifth.”).

Finally, NASCAR Talk editor Dustin Long will join us after covering the past two races at Bristol Motor Speedway and Richmond International Raceway. Dustin provides insight on the repercussions of Carl Edwards’ winning bump on Joe Gibbs Racing teammate Kyle Busch and how Tony Stewart seemed in his return to racing after missing two months. 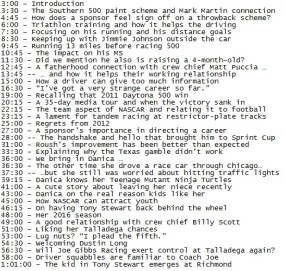