Carl Edwards‘ victory Sunday in the Toyota Owners 400 at Richmond International Raceway was his second in a row, having previously won a week ago at Bristol Motor Speedway.

There remain six different winners in the Sprint Cup Series this year through nine races.

That means six drivers have all but qualified for the Chase for the Sprint Cup.

On the latest Chase grid, Edwards jumps from fourth to first, leading Jimmie Johnson by 21 points. Kyle Busch is 29 points back, followed by Kevin Harvick (seven points behind Edwards but fourth because he only has one win), then Denny Hamlin and Brad Keselowski. 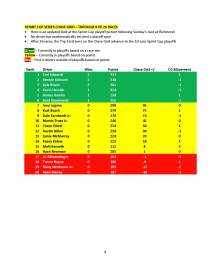