Jason Weigandt, who straddles motocross and NASCAR as a reporter and announcer, discusses the myriad intersections of racing two wheels vs. four on the latest NASCAR on NBC podcast.

For the second consecutive year, NASCAR’s trip to Atlanta Motor Speedway for the season’s second race weekend coincided with Supercross’ annual event at the Georgia Dome.

On the night before the Sprint Cup race, many NASCAR drivers attended the Supercross event, which featured a riding exhibition between Clint Bowyer, Ricky Stenhouse Jr., Ty Dillon and Greg Biffle.

Weigandt, who is the editor of RacerXonline.com and the play-by-play announcer for the Lucas Oil Pro Motocross Championship on NBCSN, said the warm reception from the NASCAR industry was noticed within the Supercross community.

“I think everyone (in Supercross) is used to, ‘We’re the minor leagues,’ and all of a sudden there was all this positive energy,” Weigandt said. “NASCAR didn’t have to say that. They could walk softly and carry a big stick. But for some reason, they were throwing a lot of love at Supercross, and I think it took people by surprise that, ‘Wait a minute. Maybe we have something here.’ I think what (Supercross has) is a portal into that young demographic that NASCAR is so desperate to get.”

While Supercross’ youthful audience is attractive to sponsors, its size still pales in comparison with NASCAR, which also claims a much broader swath of corporate sponsorship. Weigandt explains there are many lessons that each series could learn from each other.

“Anyone on the Supercross side such as myself who’s lived in it knows the sport you’re in is the stepchild and still is,” said Weigandt, who has been covering motorbike racing for more than a decade. “NASCAR is just monumentally larger. You can fudge some numbers, and I think you could argue there probably was a larger crowd at the Georgia Dome. But let’s look at almost any other metric, and NASCAR is massively bigger — starting with sponsorship dollars or TV ratings.

“I feel like NASCAR has done the best job being the least motorsports like of motorsports. They’ve done an excellent job of making it a battle of people and personalities.”

With its Chase for the Sprint Cup playoff, NASCAR also has maintained tight championship battles – which are a perennial struggle for Supercross.

With three races remaining in the Supercross season (the Motocross season, which is contested on outdoor tracks, will begin at Sacramento, California, on May 21), three-time champion Ryan Dungey is on the verge of clinching his fourth title this Saturday in Foxboro, Massachusetts.

Weigandt said the runaway points race has Supercross considering a move toward a Chase-style championship format in the future – at a time when NASCAR is moving toward motorbike racing in another way.

Heat races made their debut in the Xfinity Series last week at Bristol Motor Speedway and will return this weekend at Richmond International Raceway with an eye on possibly using the concept in Sprint Cup. It’s nothing new for Supercross and motocross events, which have employed a series of heats and shorter feature races since the major circuits’ inceptions 40 years ago.

“They haven’t changed any rules at all in about 30 years,” Weigandt said. “The fans are used to it being the most pure of motorsports. There are never technical changes to tighten the racing. They never change anything in Supercross.”

Among the other topics discussed by Weigandt, who also appears as a reporter on NASCAR America:

–How manufacturer involvement differs between NASCAR and Supercross;

–Which NASCAR driver might make the best Supercross rider;

–How coverage and interview styles differ between the series. 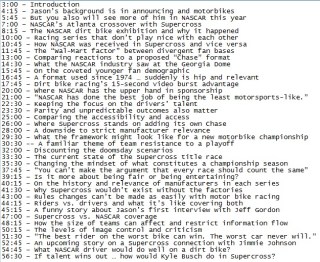