Only 40 cars can qualify for the race, which is the ninth of the season.

Tony Stewart will make his first start of the season after missing the first eight races due to injury. Brian Vickers was originally slated to drive the No. 14.

Kurt Busch is the defending winner of the race, which will be run in the daytime. Matt Kenseth won the last visit by the series to the short track. 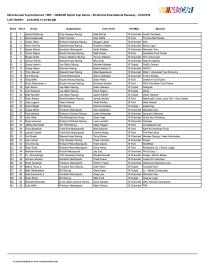