Carl Edwards led 276 laps, his second week in a row of leading the most laps, on the way to winning the Food City 500 at Bristol Motor Speedway.

Edwards gave Joe Gibbs Racing its fourth win of the season and its third in a row.

Bayne’s finish is his first top five since he won the 2011 Daytona 500 in his second career start.

Here are the results and stats for the Food City 500. 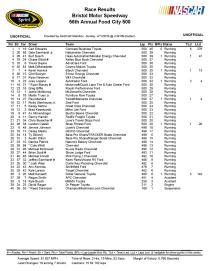