The Michigan native started from the pole and led all 50 laps of the event, which was the first of two heat races s that will precede the main event later this afternoon, the Fitzgerald Glider Kits 300.

Jones lapped 11 of the 20 drivers entered in the event.

“We did everything we needed to do there,” Jones told Fox Sports 1. “It was good, actually a little better than I thought it would be.” 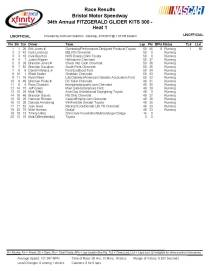