Kyle Busch, who is riding a two-race winning streak and four wins in his last four overall NASCAR races, was eighth-fastest at 127.478 mph.

One incident of note occurred when a small fire broke out under the dash in the No. 46 Chevrolet of Michael Annett.

According to team officials, the fire occurred due to the main power switch failing. The fire was quickly extinguished and Annett was not injured.

The team was making repairs and will not have to go to a backup.

Friday’s practice was the only one scheduled for Sprint Cup drivers. However, they’ll be back on-track later this afternoon for Coors Light qualifying at 4:15 p.m. ET.

There will be two more 55-minute Cup practices on Saturday. 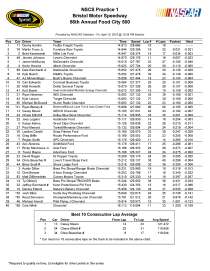