This year’s rookie class in the Sprint Cup Series has been impressive so far.

They can impress further if they can survive the gauntlet that is Bristol Motor Speedway this weekend, where their yellow rookie stripes will shine a bit brighter.

Aside from Blaney and Chris Buescher, the rookies of Elliott, Jeffrey Earnhardt and Brian Scott will be making their first Sprint Cup starts at the half-mile track with Sunday’s Food City 500.

Also making his first Cup start at Bristol is Xfinity Series driver Ty Dillon, who returns to the No. 14 to make his fifth start of the year and his third in substitution of the injured Tony Stewart.

“Most of those guys have more starts at Bristol than I have all my starts combined,” Dillon said in a press release. Dillon will be making his 12th series start.

In their first starts at Bristol last year, Blaney and Buescher finished 22nd and 25th respectively.

How do those inaugural starts at the track called “The Last Great Colosseum” compare to the Sprint Cup Series’ 21 champions in the last 46 years?

Needless to say, not everyone can do what Dale Earnhardt Sr. did in 1979. In his first time out on the Bristol’s high banks in the Cup series, the eventual seven-time champion led 163 laps and claimed his first Sprint Cup win.

Jeff Gordon, a four-time champion with five Bristol wins in 46 starts, crashed out of his first Bristol experience 19 laps from its conclusion.

Seven of the 21 drivers that have won Sprint Cup titles since 1970 are competing full-time this season. None of them finished in the top five in their first Bristol outing. The closest was Jimmie Johnson, who finished seventh in 2002.

Even Darrell Waltrip, the winningest Sprint Cup driver in Bristol history with 12 victories, could only put together a 30th-place finish in 1973.

Here’s a look at how other NASCAR champions and Hall of Famers fared in their Bristol baptisms. Stats were collected by Drew Brown, Dillon’s PR representative. 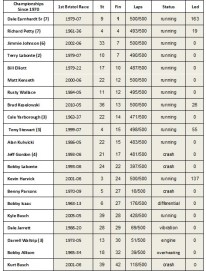