The NASCAR Xfinity Series is back on track after a two-week break with tonight’s O’Reilly Auto Parts 300 at Texas Motor Speedway.

Here’s the pertinent information for the series’ sixth race of the season:

PRERACE SCHEDULE: The Xfinity Garage opens at 11 a.m. Qualifying begins at 4:45 p.m. The driver/crew chief meeting is at 6:15 p.m. Driver introductions are at 8 p.m.

NATIONAL ANTHEM: Jake Worthington will perform the anthem at 8:31 p.m.

TV/RADIO: Fox Sports 1 will broadcast the race at 8:30 p.m. Performance Racing Network will have the race on radio and at goPRN.com, beginning at 8 p.m. SiriusXM NASCAR Radio will carry the PRN broadcast.

FORECAST: wunderground.com predicts a temperature of 72 degrees at race time with 0 percent chance of rain. 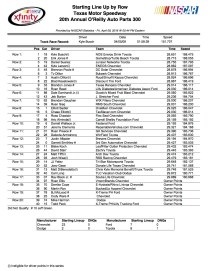