Kevin Harvick was mentioned 1,052 times on NASCAR Sprint Cup race broadcasts this season, according to a study by Joyce Julius & Associates through the first five races of the season.

The company, based in Ann Arbor, Michigan, measures and evaluates corporate sponsorships and other elements, such as driver mentions, for sponsors.

After Harvick in number of mentions in the first five races of the season was Jimmie Johnson with 846. Kyle Busch was third with 590 mentions.

Busch ranked No. 1 in interview time with 6 minutes, 32 seconds — and that came before his win last weekend at Martinsville Speedway. Next was Harvick at 5:42. 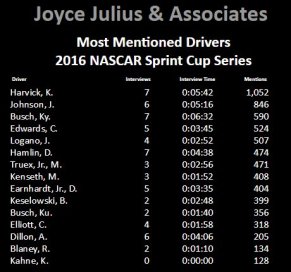