We’re one-sixth of the way through the NASCAR Sprint Cup Series schedule, but more importantly, we’re just under one-fourth of the way to qualifying for the Chase for the Sprint Cup playoffs.

Here’s the Chase Grid after Martinsville: 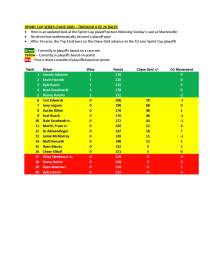