MARTINSVILLE, Va. — The NASCAR Sprint Cup Series will play host Sunday to its first short-track race of the 2016 season, the STP 500 at Martinsville Speedway.

START: Actress A.J. Cook, star of “Criminal Minds,” will give the command for drivers to start their engines at 1:07 p.m. ET. The green flag is scheduled for 1:13 p.m.

PRERACE SCHEDULE: The Sprint Cup garage opens at 7 a.m. The drivers meeting is at 11 a.m. Driver introductions are at 12:30 p.m.

NATIONAL ANTHEM: It will be performed by the U.S. Air Force Heritage Brass Band Quintet at 1:01 p.m.

FORECAST: The wunderground.com site predicts 52 degrees at race time with a 0% chance of rain.

A YEAR AGO: Denny Hamlin led the final 28 laps, taking the lead from teammate Matt Kenseth after a late restart and fending off a charge by runner-up Brad Keselowski. 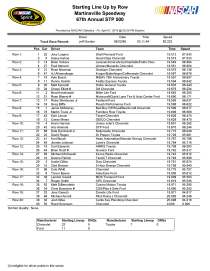