Kyle Busch became the Sprint Cup’s fifth different winner in 2016 with his victory in the STP 500 at Martinsville Speedway.

The top five was filled out by AJ Allmendinger, Kyle Larson, Austin Dillon and Brad Keselowski.

Dillon earned his second top-five finish of the season marking the first time he has recorded multiple top fives in a season.

Here are the rest of the results for the STP 500. 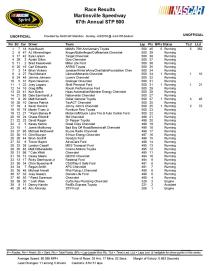