With his STP 500 victory, Kyle Busch moved up two spots in the driver standings to third, five points behind leader Kevin Harvick.

The top five in the standings following the race at Martinsville Speedway is Harvick, Jimmie Johnson, Busch, Carl Edwards and Joey Logano.

The biggest jump in the standings is AJ Allmendinger. After placing second Sunday, Allmendinger rose seven spots to 12th. Brian Vickers gained five spots to 31st after his seventh-place finish.

The largest drop in the standings goes to Aric Almirola, who fell nine spots to 22nd after his day ended early due to engine issues. 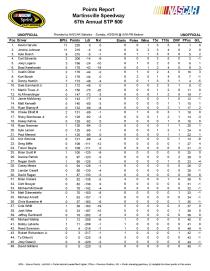