Brian Vickers shot to the top of the speed chart in Friday’s lone Sprint Cup practice session at Martinsville Speedway.

Vickers, replacing the injured Tony Stewart in the No. 14 Stewart-Haas Racing Chevrolet, ran 36 laps in the session, with a field-best speed of 97.182 mph.

There is a maximum 40-car field for the first time since the Daytona 500.

There was one incident in the session. With about a minute left on the clock, Trevor Bayne spun and backed the right rear of his Ford Fusion into the wall. The damage was severe enough that Bayne will go to a backup car.

“We were giving up two to three-tenths into both corners, and I tried to just push the braking zone a little bit more, and it started wheel-hopping really bad,” Bayne said. “There was nothing I could do about it.

“Once it started bouncing I tried to save it and once it got backwards, stood in the gas, and it just backed in.  I really hate this for our AdvoCare team.  You never want to tear one up, especially not in practice, but maybe that rear wheel-hop won’t be in our back-up car and we can go qualify OK.

“The backup car will be good.  I hate that we worked on that one in race trim, and I tore it up, but I just feel really bad about it.  I think this might be the first one I’ve got to for a back-up in practice, but they’ll get it ready for qualifying.”

Two more practice sessions will be held on Saturday, while qualifying will take place later this afternoon at 4:15 pm ET. 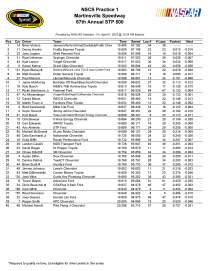 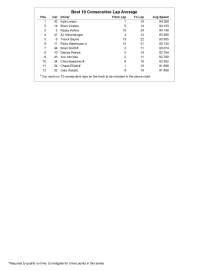