There are 39 trucks on the preliminary entry list for the Camping World Truck Series’ Alpha Energy Solutions 250 at Martinsville Speedway.

There are two drivers yet to be announced on the entry list.

Not present on the entry list is Claire Decker in the No. 10 usually driven by Jennifer Jo Cobb. Cobb announced on Facebook she will be at track on race day but Decker will be in her place after a prior TV appearance she committed to fell through.

This will be Decker’s Truck series debut. 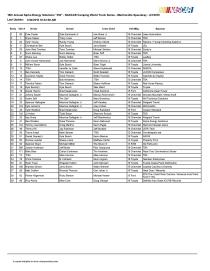