Jimmie Johnson became the first repeat winner of the season Sunday with his victory in the Auto Club 400. That means any potential automatic qualifiers for the Chase for the Sprint Cup were shut out.

That doesn’t mean there wasn’t a shakeup in the Chase grid heading into the off week before the Cup series returns April 3 at Martinsville Speedway.

The newest members of the top 16 includes rookie Chase Elliott. He is 16th, tied with fellow rookie Ryan Blaney with 110 points, after finishing sixth Sunday. Elliott is 16th because he owns the tiebreaker with the second-beset finish (both have a best finish this season of sixth and Elliott’s next best finish is eighth compared to 10th for Blaney). Joining Elliott is Ricky Stenhouse Jr. at 14th. The Roush Fenway Racing driver earned the fourth top-five finish of his career.

Matt Kenseth, the previous holder of the 16th spot, is now 15th and three points ahead of Elliott and Blaney.

The first four drivers out of top 16 are Blaney, Kasey Kahne, AJ Allmendinger and Ryan Newman. 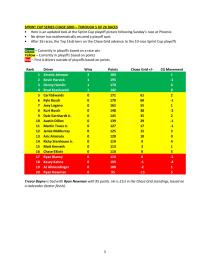