Here are the particulars (all times are Eastern):

START: Eric Dane, start of TNT’s “The Last Ship” will give the command for drivers to start their engines at 3:38 p.m. ET. The green flag is scheduled for 3:47 p.m.

NATIONAL ANTHEM: Jon Foreman of SwitchFoot will perform the anthem at 3:32 p.m., followed by a flyover from two F-16s from the 16th Weapons Squadron at Nellis Air Force Base.

FORECAST: The wunderground.com site predicts 72 degrees at race time with a 0% chance of rain.

TO THE REAR: Kurt Busch will move to the rear of the field because his team switched to a backup car after an incident in Saturday’s practice. 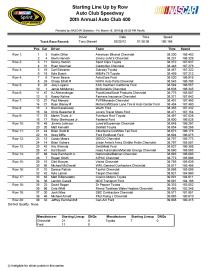