At 0.232 of a second, the average margin of victory in the first four races in the Sprint Cup Series is the lowest it has been in more than 20 years.

Check out this interesting graphic, courtesy of NASCAR: 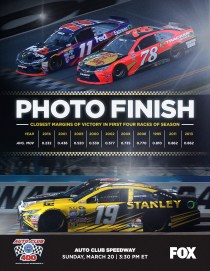