Kevin Harvick may have finished second in Sunday’s Auto Club 400, but he remained on top of the Sprint Cup point standings.

The drivers making the biggest gains – climbing five positions each – were Chase Elliott (from 21st to 16th), Ryan Newman (25th to 20th). 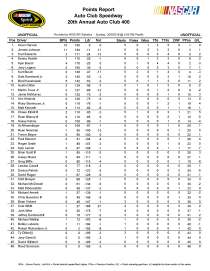