The NASCAR Xfinity Series ends its portion of the three-race West Coast swing today with the Treatmyclot.com 300 at Auto Club Speedway.

Here’s the important information for the series’ fifth race of the season: (All times are Eastern)

START: Mark Jablonski, co-founder of National Blood Clot Alliance and current member of the Board of Directors is scheduled to give the command to start engines at 4:07 p.m. The green flag is expected to wave at 4:14 p.m.

NATIONAL ANTHEM: To be announced.

TV/RADIO: Fox Sports 1 will broadcast the race at 4 p.m. The Motor Racing Network will have the race on radio and at MRN.com, beginning at 3:30 p.m. SiriusXM NASCAR Radio will carry the MRN broadcast.

FORECAST: wunderground.com predicts a temperature of 79 degrees at race time with no chance of rain.

LAST TIME: Kevin Harvick started sixth and led 100 laps on the way to winning the 2015 edition of the race at Auto Club Speedway. He was followed by Brendan Gaughan, Erik Jones, Chase Elliott and Chris Buescher. 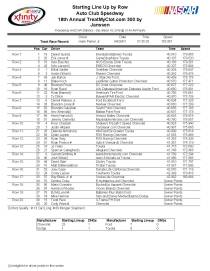