Austin Dillon paced himself, kept his eyes on his fuel level and then avoided being forced into the wall on the final lap to rally and win Saturday’s TreatMyClot.com 300 Xfinity Series race at Auto Club Speedway.

“I just kind of stayed focused on our fuel the whole time,” Dillon told Fox Sports 1.

There was still one obstacle left between Dillon and victory lane: Kyle Busch, who had his left front tire fail on the final lap, continued racing on essentially three tires, trading the lead with Suarez before gaining it back when Suarez ran out of fuel.

Busch went high, which forced Dillon into the turn 4 wall, but Dillon got away and sailed to the checkered flag.

“He tried to screw me there at the end, but it didn’t work out for him, did it?” Dillon said of Busch’s ploy with a smile on his face.

Afterward in his press conference, Dillon said of the battle with Busch: “It’s just racing. I would have probably done the same thing. I was a little aggressive on TV because I was jacked up, adrenaline was flowing. He made the move to try to hold off to win the race. Anybody in their right mind would have tried to win the race. I’m not mad at him at all. It just made for a crazy finish. At least it was fun.”

Busch led 133 of the race’s 150 laps, while Dillon led just the final lap for his seventh career Xfinity Series victory.

“I didn’t think we had a car to do that, and we didn’t, but we did what we had to do to win the race,” Dillon said.

After the race, the No. 6 Roush Fenway Racing Ford of Bubba Wallace was found to have failed post-race heights, according to NASCAR.com. 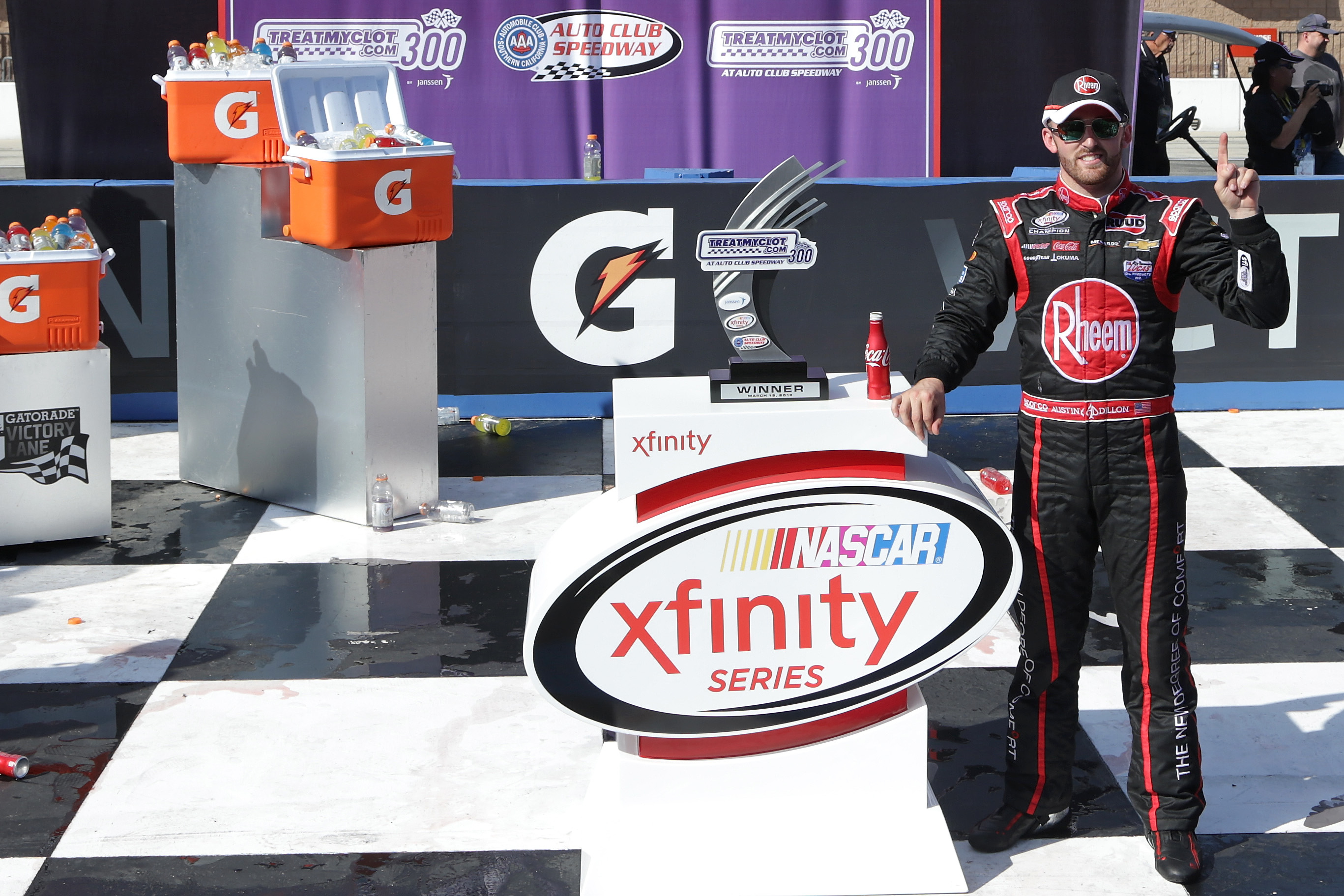 HOW DILLON WON: It was a race of attrition. Each of the top three drivers at the time (Busch, Jones and Suarez) suffered maladies in the final three laps. Dillon paced himself, let the race come to him.

WHO ELSE HAD A GOOD RACE: Darrell Wallace Jr. matched his Xfinity career best finish (third at Chicagoland last September). … Despite running out of fuel on the last lap, points leader Daniel Suarez still managed to extend his streak of top-10 consecutive finishes to a career-best 11 races in a row, dating back to last season. … Elliott Sadler extended his streak of top-10 finishes to all five races of 2016.

WHO HAD A BAD RACE: Ray Black Jr. got loose on Lap 46 and damaged his front end and splitter when he spun into the frontstretch grass. Black finished 37th. … David Starr also had an early wreck that relegated him to a 38th-place finish.

NOTABLE: Brendan Gaughan finished seventh, his best finish of 2016. … When Ryan Preece went for a spin on Lap 9, it continued a trend where every race thus far this season has had at least one caution within the first 10 laps.

QUOTE OF THE DAY: “It’s just racing. I would have probably done the same thing.” – Austin Dillon on hitting the wall on the last corner as he got by Kyle Busch.

WHAT’S NEXT: The Xfinity Series, as well as the Sprint Cup and Camping World Truck series, are all off next weekend for the Easter holiday. The next NXS race is April 8 at Texas Motor Speedway.

Crew members from other teams were nearby when Gibbs hit Dillon’s car, causing it to swerve. No crew members or officials were hit.

NASCAR has made it a priority that drivers are not to cause contact that could injured crew members or officials on pit road. NASCAR also penalized Gibbs 25 Cup driver points and docked 23XI Racing 25 car owner points for the No. 23 Cup car that Gibbs drives.

Byron drops from third in the playoff standings to below the cutline heading into Sunday’s Cup race at Talladega Superspeedway (2 p.m. ET on NBC).

Hendrick Motorsports stated it would appeal the penalty.

The caution waved at Lap 269 for Martin Truex Jr.’s crash. As Hamlin slowed, Byron closed and hit him in the rear.

Byron admitted after the race the contact was intentional, although he didn’t mean to wreck Hamlin. Byron was upset with how Hamlin raced him on Lap 262. Byron felt Hamlin forced him into the wall as they exited Turn 2 side-by-side. Byron expressed his displeasure during the caution.

Hamlin and crew chief Chris Gabehart argued and questioned NASCAR for not putting Hamlin back in second place — where he was before Byron hit him — and also questioned Byron not being penalized.

“I guess we can just wreck each other under caution,” Hamlin said after the race.

Scott Miller, NASCAR senior vice president of competition, told reporters after the race that series officials did not penalize Byron because they did not see the incident.

“When we were in the tower, we were paying more attention to the actual cause of the caution up there and dispatching our equipment,” Miller said. “The William Byron-Denny Hamlin thing, we had no eyes on. We saw Denny go through the grass.

“By the time we got a replay that showed the incident well enough to do anything to it, we had gone back to green.”

We will appeal the penalty issued today by NASCAR. https://t.co/qKlVI8qPHA

CONCORD, N.C. — Kurt Busch said Tuesday he remains “hopeful” he will recover from a concussion in time to race again before the end of the NASCAR Cup season.

The 2004 Cup champion has been sidelined since he crashed July 23 during qualifying at Pocono Raceway. He’s so far missed 10 races – both Ty Gibbs and Bubba Wallace have driven the No. 45 Toyota for 23XI Racing since Busch was injured – and withdrew his eligibility to participate in the playoffs.

“I’m doing good. Each week is better progress and I feel good and I don’t know when I will be back, but time has been the challenge. Father Time is the one in charge on this one,” Busch said.

There are six races remaining this season and 23XI co-owner Denny Hamlin said the team has contingency plans for Busch’s recovery and is not pressuring the 44-year-old to get back in the car. Busch is under contract at 23XI through next season with an option for 2024.

Hamlin said this past weekend at Texas that Busch has a doctor’s visit scheduled in early October that could reveal more about if Busch can return this season.

Busch has attended a variety of events to stimulate his recovery and enjoyed an evening at the rodeo over the weekend. But his visit to Charlotte Motor Speedway on Tuesday for its 10th annual honoring of Breast Cancer Awareness Month was Busch’s first official appearance as a NASCAR driver since his injury.

He attended for the second consecutive year as part of his “Window of Hope” program in which all the window nets on the Cup cars will be pink meshing in next week’s race on The Roval at Charlotte. Busch credited the Toyota Performance Center at TRD’s North Carolina headquarters for helping his recovery and getting him out to events again.

“I feel hopeful. I know I have more doctor visits and distance to go, and I keep pushing each week,” Busch said. “And TPC, Toyota Performance Center, has been a group of angels with the workouts and the vestibular workouts, different nutrition as well and different supplements and things to help everything rebalance with my vision, my hearing. Just my overall balance in general.”

He said his vision is nearly 20/20 in one eye, but his other eye has been lagging behind in recovery. Busch also said he wasn’t sure why he was injured in what appeared to be a routine backing of his car into the wall during a spin in qualifying.

NASCAR this year introduced its Next Gen car that was designed to cut costs and level the playing field, but the safety of the spec car has been under fire since Busch’s crash. Drivers have complained they feel the impact much more in crashes than they did in the old car, and a rash of blown tires and broken parts has plagued the first four races of the playoffs.

Busch said his concussion “is something I never knew would happen, as far as injury” and likened his health battle to that of the breast cancer survivors who aided him in painting the pit road walls at Charlotte pink for next week’s race.

“Each situation is different. It’s similar to a breast cancer survivor. Not every story is the same, not every injury is the same,” Busch said. “It’s not like a broken arm and then you get the cast taken off and can go bench press 300 pounds. It’s a process. I don’t know what journey I’m on, but I’m going to keep pushing.”

Four races into the NASCAR Cup Series playoffs and drivers who are eligible to win the championship remain 0-for-4 in pursuit of race wins.

And now we go to Talladega Superspeedway, where there is potential for drivers from the far back end of the field to emerge victorious, given the impact of drafting and, more significantly, wrecking.

MORE: Winners and losers at Texas

Hamlin could be a busy guy the rest of the season. His potential retaliation list grew Sunday with the addition of William Byron after they had a major disagreement.

Here’s how the rankings look in the middle of the Round of 12:

1. Denny Hamlin (No. 3 last week) — Despite everything — the tires, the wrecks, the hassle, the weather and a brouhaha with William Byron, Hamlin finished 10th Sunday and is sixth in the playoff standings entering Talladega. He has the best average finish — 5.75 — in the playoff races. Unless his “list” gets in the way, Hamlin might be ready to seriously challenge for his first championship.

2. Kyle Larson (No. 4 last week) — Larson led 19 laps at Texas and probably should have led more with one of the race’s best cars. Now fourth in points, he figures to be a factor over the final two weeks of the round.

3. Chase Elliott (No. 2 last week) — Elliott was not a happy camper after smashing the wall because of a tire issue and riding a flaming car to a halt. He finished 32nd.

4. Joey Logano (No. 6 last week) — Logano was chasing down winner Tyler Reddick in the closing laps at Texas. He jumps to first in the playoff standings and gains two spots in NBC’s rankings.

6. Christopher Bell (No. 1 last week) — Bell had a rotten Sunday in Texas, crashing not once but twice with tire issues and finishing 34th, causing a precipitous drop on the rankings list.

7. Ross Chastain (No. 7 last week) — Chastain’s team played the tires and the cautions right and probably deserved better than a 13th-place finish Sunday.

8. Ryan Blaney (No. 8 last week) — Mr. Winless (except in All-Star dress) rolls on. A fourth-place run (and 29 laps led) Sunday keeps him relevant.