The Sprint Cup Series is enjoying a stretch of parity to open its season as four different drivers have found victory lane through four races. That means barring misfortune, four drivers have locked themselves into the Chase for the Sprint Cup.

This leaves 12 spots to be filled over the next 22 races while Denny Hamlin, Jimmie Johnson, Brad Keselowski and Kevin Harvick will enjoy the perks of their wins.

Austin Dillon is ninth on the Chase grid following his third top 10 and fourth top-15 finish of the season Sunday at Phoenix International Raceway.

Kyle Larson is the first driver currently out of the Chase, five points behind Kenseth. 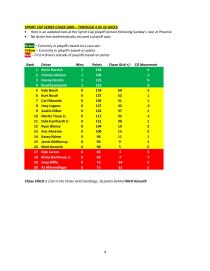