START: Mark Goggess, Good Sam Chief Operating Officer, will give the command for drivers to start their engines. The command will be given at 3:38 p.m. ET. The green flag is scheduled for 3:45 p.m.

NATIONAL ANTHEM: Jordan Fisher, actor and Hollywood Records recording artist, will perform the anthem at 3:31 p.m., followed by a flyover from two F-35s from Luke Air Force Base.

FORECAST: The wunderground.com site predicts 75 degrees at race time with a 0% chance of rain. 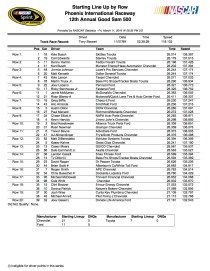