Kevin Harvick held off a furious charge by Carl Edwards in overtime Sunday, his sixth victory in the past eight Sprint Cup starts at Phoenix International Raceway. Harvick won by 0.010 seconds.

The tight finish was set up by a final caution when Kasey Kahne‘s car hit the wall with six laps remaining in a race scheduled for 312 laps.

Harvick, who led a race-high 139 laps, elected to keep his No. 4 Chevrolet on the track during the yellow, along with Dale Earnhardt Jr. and Austin Dillon. Edwards’ No. 19 Toyota restarted fourth as the first car that pitted. 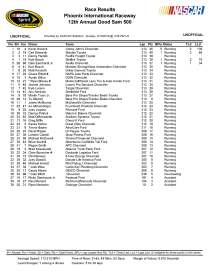