The NASCAR Xfinity Series moves into its fourth race of the season with today’s Axalta Faster. Tougher. Brighter. 200 at Phoenix International Raceway.

Here are the particulars for today’s race: (All times are Eastern)

START: Charlie Shaver, Chairman and CEO of Axalta, will give the command to start engines at 2:38 p.m. The green flag is scheduled to wave at 2:45 p.m.

NATIONAL ANTHEM: The Anglim Sisters will perform the anthem at 2:31 p.m.

FORECAST: wunderground.com predicts a temperature of 69 degrees at race time with a 0 percent chance of rain. 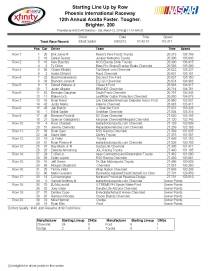