START: The command for drivers to start their engines will be given at 3:37 p.m. ET. The green flag is scheduled for 3:46 p.m.

NATIONAL ANTHEM: It will be performed by Craig Morgan at 3:31 p.m., followed by a fly-over by the U.S. Air Force Thunderbirds.

FORECAST: The wunderground.com site predicts 65 degrees at race time with a 31% chance of rain.

BACKUP CARS: Carl Edwards and Jamie McMurray will give up their starting spots after going to a backup car. 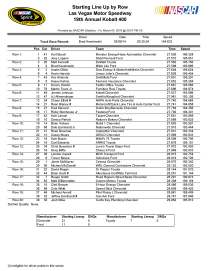