While their Toyota brethren struggled during Sprint Cup practice, such was not the case during Friday’s first of two NASCAR Xfinity Series practice sessions at Las Vegas Motor Speedway.

There was one significant incident during the session: Derrike Cope brought out the red flag with just over eight minutes remaining when he hit hard into the retaining wall, incurring heavy damage to the entire right side of his car.

Cope was expected to go to a backup car and potentially return to the track for the second session of the day, which begins at 6 p.m. ET.

Here’s how the first Xfinity practice session played out: 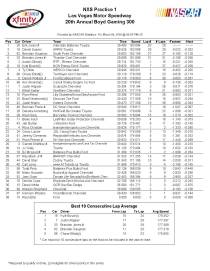