START: Actor and Georgia native Robert Patrick, who has starred in “Scorpion,” “Terminator 2,” and “The X Files,” will give the command for drivers to start their engines at 1:07 p.m. ET. The green flag is scheduled for 1:16 p.m.

PRERACE SCHEDULE: The Sprint Cup garage opens at 7 a.m. The drivers meeting is at 11 a.m. Driver introductions are at 12:30 p.m.

NATIONAL ANTHEM: It will be performed by CNN host Robin Meade at 1:01 p.m.

FORECAST: The wunderground.com site predicts 63 degrees at race time with a 0% chance of rain.

LAST TIME: Jimmie Johnson led 52 of the final 63 laps, scoring his fourth victory at Atlanta and first since 2007. 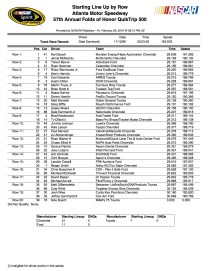