For at least the next month Parker Kligerman will lead the point standings in the Camping World Truck Series.

The NASCAR on NBC analyst has two top-10 finishes to start the season while driving the No. 92 Ford for owner Ricky Benton. Kligerman finished eighth in Saturday’s race at Atlanta Motor Speedway. That’s after finishing third in the season opener at Daytona.

The top five until the series’ next race on April 2 at Martinsville Speedway is Kligerman, Daniel Hemric, John Hunter Nemechek, Timothy Peters and Tyler Young. 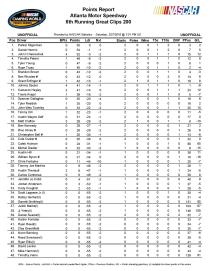