Daniel Suarez had the fastest lap at 181.902 mph. JGR teammate Erik Jones, who was fastest in the morning practice, was second fastest in the middle session at 180.975 mph.

Here’s how the second of three Friday practice sessions for the Xfinity Series played out: 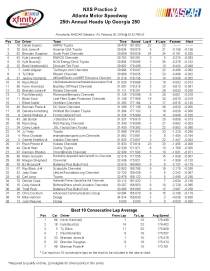