Jones also led the first session for the Heads Up Georgia 250, which will take place Saturday at the 1.5-mile oval. 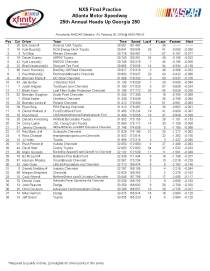 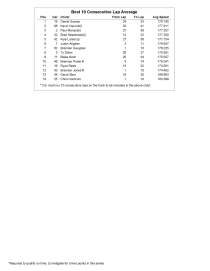 Texas marked the fourth consecutive playoff race that the winner didn’t advance to the next round.

All three races in the first round were won by drivers not in the playoffs. Tyler Reddick won Sunday at Texas, a week after he failed to advance from the Round of 16 and was eliminated from title contention.

Texas did shake up the playoff standings. Chase Elliott entered as the points leader but a blown tire while leading sent his car into the wall, ending his race. He falls to the No. 8 spot, the final transfer position with two races left in this round. He’s tied with Daniel Suarez, but Suarez has the tiebreaker with a better finish this round.

The series races Sunday at Talladega (2 p.m. ET on NBC). Noah Gragson’s win at Texas moved him on to the next round. The win was his fourth in a row.

The series was off this past weekend but returns to the track Saturday at Talladega. Ty Majeski has advanced to the championship race at Phoenix with his Bristol win. A look at the winners and losers from Sunday’s marathon race at Texas Motor Speedway:

Justin Haley – Haley, who has shown flashes of excellence this season for Kaulig Racing, matched his season-high with a third-place run.

Chase Briscoe — Briscoe wrestled with major problems in the early part of the race but rebounded to finish fifth. It’s his second top-10 finish in the last 22 races.

Christopher Bell – Bell met the wall twice after blown tires and finished a sour 34th, damaging his playoff run in a race that he said was critical in the playoffs.

Track workers – Somebody had to clean up all that tire debris.

Chase Elliott – Elliott remains a power in the playoffs, but he left Sunday’s race in a fiery exit after a blown tire while leading and finished 32nd. He holds the final transfer spot to the next round heading into Talladega.

FORT WORTH, Texas — A Goodyear official said that air pressures that teams were using contributed to some drivers blowing tires in Sunday’s Cup playoff race at Texas Motor Speedway.

Chase Elliott, Kevin Harvick and Martin Truex Jr. all crashed while leading after blowing a tire. Among the others who had tire issues were Alex Bowman, Chris Buescher Cole Custer and Christopher Bell twice.

“We’re gaining as much information as we can from the teams, trying to understand where they are with regard to their settings, air pressures, cambers, suspicions,” said Greg Stucker, Goodyear’s director of racing Sunday. “For sure I can say without a doubt air pressure is playing into it. We know where a lot of the guys are. Some were more aggressive than others. We know that plays a part.

“I’m not saying that’s the only thing, but it’s certainly a factor, so we’re just trying to understand everything else that is going on with regard to specific teams. We know a lot of guys have not had issues. We’ve had guys put full fuel runs on tires, but, obviously, other guys have had issues. We’ll be working with them to try to sort through that is.”

Eight of the 16 cautions were related to tire failures that caused drivers to spin or crash.

“It’s not a good look, that’s for sure,” Ryan Blaney said of the tire issues others had. “How many leaders blew tires tonight? Three or four?

“You just don’t understand what is making these things do that. From last week to this week, it’s really unfortunate. It’s just luck now.

“You never know if you’re going to blow one. You go into (Turn) 3 almost every lap with 40 laps on your stuff and I don’t know if one is going to blow out or not. That’s not safe. That’s for sure. Running (180) into (Turn) 3 and the thing blows out and you have no time to react to it. It’s unfortunate. I hope we can figure that out.”

Blaney said he was confused that the tires were blowing partly into a run instead of much earlier.

“It was weird because those tires didn’t blow right away,” he said. “Like the pressures were low. They blew like after a cycle or two on them, which is the weird thing.”

Asked how he handles that uncertainty, Blaney said: “Nothing I can do about it. Just hope and pray.”

After his crash, Elliott was diplomatic toward Goodyear’s situation:

“I’m not sure that Goodyear is at fault,” he said. “Goodyear always takes the black eye, but they’re put in a really tough position by NASCAR to build a tire that can survive these types of racetracks with this car. I wouldn’t blame Goodyear.”

Tyler Reddick, who won Sunday’s race at Texas, said his team made adjustments to the air pressure settings after Saturday’s practice.

“We ran enough laps, were able to see that we had been too aggressive on our right front tire,” he said. “So we made some adjustments going into the race, thankfully.”

This same time was used at Kansas and will be used again at Las Vegas next month in the playoffs.

Reddick is hopeful of a change but also knows it might take time.

“I just think to a degree, potentially, as these cars have gotten faster and we’re getting more speed out of them, maybe, hypothetically speaking, we’re putting the cars through more load and more stress on the tire than they ever really thought we would be,” he said.

“It’s a brand-new car. It’s the first time in the history of our sport we’ve gone to an 18-inch wheel and independent rear suspension. All these things are way different, diffuser. All these things, way different. We’re all learning together. Unfortunately, just the nature of it, we’re having tire failures.”

FORT WORTH, Texas — A senior NASCAR executive admitted that series officials did not see William Byron spin Denny Hamlin under caution on the frontstretch of Sunday’s Cup playoff race at Texas Motor Speedway.

The missed call could have major implications in the playoffs — even if series officials decide to penalize Byron later this week, as was hinted Sunday night.

The issue occurred after Martin Truex Jr. blew a tire while leading and crashed in Turn 3 on Lap 269 of the 334-lap race.

With the caution lights illuminated, Hamlin slowed. Byron hit him in retaliation for forcing him into the wall earlier. Hamlin spun across the infield grass. NASCAR did not put Hamlin back in his original spot before the contact and did not penalize Byron.

“When we were in the tower, we were paying more attention to the actual cause of the caution up there and dispatching our equipment,” Scott Miller, NASCAR senior vice president of competition said after the race. “The William Byron-Denny Hamlin thing, we had no eyes on. We saw Denny go through the grass.

“By the time we got a replay that showed the incident well enough to do anything to it, we had gone back to green. I’m not sure that that issue is completely resolved as of yet. We’ll be looking at that when we get back to work.”

Miller did not elaborate on what NASCAR could do this week.

Hamlin expressed his shock on social media at Miller’s comments:

We were on the radio yelling at them what happened. I challenged my spot. What are they doing up there then?

Miller explained how officials missed the Byron-Hamlin incident: “The cameras and the monitors that we’ve got, we dedicate them mostly to officiating and seeing our safety vehicles and how to dispatch them. By the time we put all those cameras up (on the monitor in the control tower), we don’t have room for all of the in-car cameras to be monitored.

“If we would have had immediate access to (Byron)’s in-car camera, that would have helped us a lot, being able to find that quickly. That’s definitely one of the things we’re looking at.”

Had NASCAR seen the incident or video sooner, Miller said officials would have reacted.

“If we had seen that good enough to react to it real time, which we should have, like no excuse there, there would probably have been two courses of action,” he said. “One would have been to put Hamlin back where he was, or the other would be to have made William start in the back.”

Race winner Tyler Reddick said NASCAR needs to address the situation to avoid other contact under caution in the future.

I’m sure (NASCAR will) make some sort of a decision. I’m sure there will be something they’ll address this week, updates, on NASCAR’s side. I’ll be curious to see what that is. We can’t really have this where you dump someone under caution, they go to the back and you don’t. That could potentially be an interesting situation in the future.”

Byron said he hit Hamlin to show his dissatisfaction for being forced into the wall.

Hamlin didn’t see it that way.

Asked about having a conversation with Byron, Hamlin said: “I keep hearing these guys, but I’ll just add it to the list of guys when I get a chance they’re going to get it.”

Hamlin and crew chief Chris Gabehart both were frustrated with NASCAR not putting Hamlin back to second after the contact. Instead, NASCAR put him outside the top 15. After pitting, Hamlin restarted 19th. Byron, after pitting, restarted 10th.

“The man wrecks you under caution and he gets no penalty?” Gabehart said on the team’s radio. “What are they doing?”

Said Hamlin after the race: “I can’t argue the rules with them inside the car and the team did everything they could to try to make a case but ultimately we went spinning through the infield under caution.”

The result is that Byron finished seventh. That puts him third in the playoff standings. He’s 17 points above the cutline going into next weekend’s race at Talladega.

Hamlin finished 10th and is sixth in the playoff standings. He’s eight points above the cutline.

#NASCAR’s Scott Miller on what officials will look to do to avoid missing another situation like they did when Byron spun Hamlin under caution. pic.twitter.com/tXMS8XKHld