Now in his third full-time season as a Sprint Cup driver, Kyle Larson still is looking for his first career Cup win.

Atlanta Motor Speedway would be an appropriate place to get it — Chip Ganassi Racing announced in August 2013 news conference at the track that Larson would move to Sprint Cup the following season.

Larson might have gotten off to a great start toward accomplishing a career breakthrough with Friday’s lone Sprint Cup practice at 1.5-mile oval. He had the fastest lap of all drivers at 192.902 mph, more than a 1 mph over the second-fastest driver, 2014 Atlanta winner Kasey Kahne (191.807 mph).

Sprint Cup qualifying will occur later this afternoon at 5:45 p.m. ET. There will be two more Cup practices on Saturday prior to the Xfinity and Camping World Truck Series races. 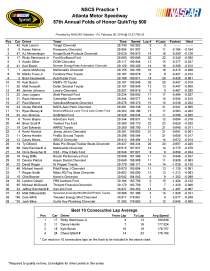