It’s finally here, the start of the 2016 season. After a long winter, and a full Speedweeks schedule, the Sprint Cup Series opens its year at Daytona International Speedway.

Here’s a look at the details for today’s race.

START: Gerard Butler, start of the upcoming film “London Has Fallen,” will give the command to start engines at 1:19 p.m. The green flag is scheduled to wave at 1:31 p.m.

PRERACE SCHEDULE: The Sprint Cup garage opens at 7 a.m. The driver/crew chief meeting is at 11 a.m. Driver introductions will take place at 12:40 p.m.

NATIONAL ANTHEM: The 82nd Airborne Division All American Chorus will perform the anthem at 1:12 p.m.

FORECAST: wunderground.com predicts sunny skies with a temperature of 73 degrees and 0 percent chance of rain at race time.

BACK OF THE FIELD: Five cars will go to the rear because teams had to go to backup cars after crashes in Thursday’s qualifying races. Those drivers moving to the rear will be: Matt Kenseth, Jimmie Johnson, Martin Truex Jr., A.J. Allmendinger and Brian Scott. 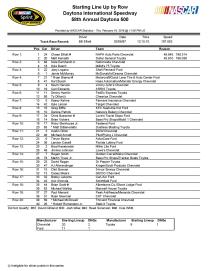