The season also begins a new way of how the series will determine its champion. It will use a Chase format similar to what is used in the NASCAR Sprint Cup Series. The last driver to go on to win the championship after winning the February Daytona race is Randy LaJoie in 1997.

START: Dan Draper, managing director, Invesco PowerShares Global EFT, will give the command to start engines at 3:37 p.m. The green flag is scheduled to wave at 3:49 p.m.

PRERACE SCHEDULE: The Xfinity garage opens at 7 a.m. Qualifying is at 10 a.m. The driver/crew chief meeting is at 11:50 a.m. Driver introductions are at 3 p.m.

FORECAST: wunderground.com predicts a temperature of 69 degrees at race time with a 0 percent chance of rain. 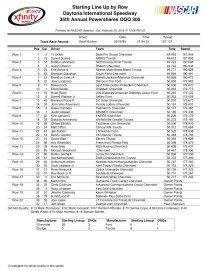