Elliott Sadler is getting his tenure at JR Motorsports off on the track foot. Sadler led four laps and finished fourth in the Powershares QQQ 300.

As the highest finishing Xfinity Series regular, Sadler leaves Daytona International Speedway with the lead in the driver’s standings. Sadler has a three-point advantage over Darrell Wallace Jr., who finished sixth. 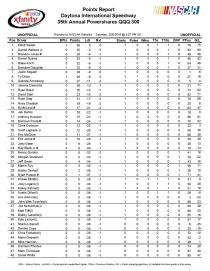