The final practice session for the Daytona 500 has concluded with two-time winner Dale Earnhardt Jr. finishing with the fastest speed.

Earnhardt told Fox Sports 1 his speed of 197.131 mph is a result of getting caught up in a draft despite trying to make a single-car run.

The fifth-fastest driver was Kurt Busch (196.061 mph). Fifteen teams did not see the track in the 90-minute session.

Here’s the speed chart for the final Daytona 500 practice. 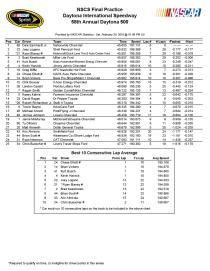