Dillon had a field-best speed of 182.113 mph, nearly a full 1 mph faster than Ray Black Jr. (181.207). Third fastest was Jeb Burton, who signed earlier this week to drive for Richard Petty Motorsports this season. Burton’s top speed was 181.127 mph.

Here’s how the final practice played out: 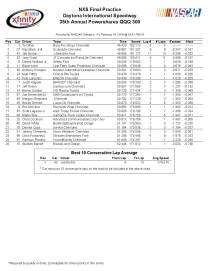