DAYTONA BEACH, Fla. — Jimmie Johnson rebounded in his backup No. 48 Chevrolet for the Daytona 500, leading the first of two Sprint Cup practices Friday with a 194.083-mph lapat Daytona International Speedway.

Johnson wrecked his primary car on the final lap of Thursday’s second qualifying race, necessitating a move to the backup. He will start from the rear of the field.

Only 13 drivers made laps in the session. Matt Kenseth, who lost his primary car in the Thursday crash with Johnson, wasn’t among those on track. There’s another practice at 2 p.m. 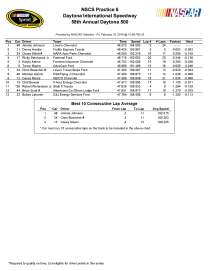