Spencer Gallagher may have been fastest in Thursday’s second Camping World Truck Series practice, but Timothy Peters – who was fastest in the first session earlier in the day – wasn’t far behind.

Tyler Reddick was third fastest at 187.946, while rookie and two-time defending Chili Bowl winner Rico Abreu was fourth fastest at 185.778.

The Trucks are back on the track Friday for qualifying and later in the evening, the season-opening NextEra Energy Resources 250. 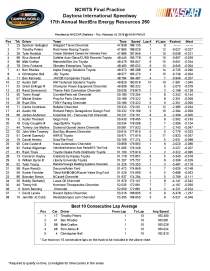