The second Can-Am Duel qualifying race was uneventful until Kyle Busch won under caution thanks to a last-lap crash involving Matt Kenseth, the outside pole-sitter for the Daytona 500.

The 60-lap race went caution-free until a crash in Turn 2 that started when Jimmie Johnson got loose while slowing down to avoid Jamie McMurray on the outside. The No. 48 then hit Martin Truex Jr. The crash collected A.J. Allmendinger and Danica Patrick, who spun into the grass while trying to avoid it. Kurt Busch also received damage but didn’t need a backup car.

Kenseth and Johnson both will start Sunday’s Daytona 500 from the rear in backup cars. Kenseth had the lead for the first 23 laps until debris on his grille forced him to yield to Kyle Busch, who led 35 laps and is a three-time qualifying race winner.

“I guess it was pretty quiet and calm there for a long time there until the last lap when it got kind of crazy behind me,” Busch told Fox Sports 1. “Great car. The guys at Joe Gibbs Racing did a phenomenal job this winter building some new pieces to come down here with and have some fun.”

His No. 18 Toyota was followed by McMurray, Kurt Busch, Carl Edwards and Ty Dillon.

Truex, who didn’t make a qualifying attempt on Sunday due to a roof-flap problem, also will need a backup car after the wreck. Truex has been involved in last-lap accidents in the Sprint Unlimited and his Duel race.

“I’m sure it will be OK; our guys build really good race cars,” Truex told Fox Sports 1. “It’s a shame. Two cars on the last lap in two races in Turn 1.”

Robert Richardson Jr. raced his way into the Daytona 500 with an 18th-place finish. The BK Racing driver will start 40th.

HOW KYLE BUSCH WON: The defending Sprint Cup champion took the lead from Kenseth on Lap 24 so Kenseth could get debris off his grille. Kenseth didn’t regain the lead and aside from two laps during green-flag pit stops, Busch led the rest of the race.

WHO HAD A GOOD RACE: Matt DiBenedetto, driving the “open” No. 93 car for BK Racing, finished ninth and will start 20th in the Daytona 500 … Even though she was separated from the lead pack after green-flag stops and was part of the last-lap crash, Danica Patrick finished seventh … After having crashed in the Sprint Unlimited, Brian Vickers stayed out of trouble and finished the duel in eighth.

WHO HAD A BAD RACE: Casey Mears ran in the top five all night and was in second place with two laps remaining when he ran out of gas. The No. 13 finished 17th, one lap down … Ryan Newman, who was involved in a practice accident Wednesday, fell off the pace at the halfway point because of a mechanical issue, visited the pits on Lap 32 and was pushed to the garage. Newman finished last in 22nd … Michael Waltrip made an unscheduled pit stop with 16 laps left and finished 20th, one lap down.

NOTABLE: BK Racing will have all four of its entries in the Daytona 500 after Robert Richardson Jr. and Matt DiBenedetto finished in ninth and 18th.

QUOTE OF THE NIGHT: “I’m very, very honored to be a part of BK Racing, having another opportunity to run here at the Daytona 500. I’ve been in it once before, but this one is very, very special to me. My wife and I welcomed our brand‑new baby boy who was born in early December. Every bit of earnings we get from this race is going to go into a college fund for him.” – Robert Richardson Jr. after qualifying for his third Daytona 500. 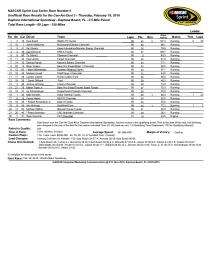